There's just time today for a mention of a track by one of our favourite 'Indie' musicians, 'Ari' from Iceland, whom we've featured a couple of times previously, most recently when he released his album 'Radikoj', the follow up to the equally enjoyable 'Frae'. In his most recent release, he's teamed up with fellow Icelandic musician 'Toggi' in a single entitled 'Anthem', which was written by 'Ari and sung by 'Toggi. And its a lovely track, with Toggi sounding a tiny bit 'John
Andy Wors

So we maybe might squeeze in one special feature over the weekend, but our last 'new release' of the year is, somewhat inevitably a 'Christmas song'. Just as inevitably it doesn't involve happy dancing Santa's, talking reindeer or even a little baby Jesus, but instead a more thoughtful reflection of what Christmas can be like for some, courtesy of Icelandic band 'When 'Airy Met Fairy' and their song 'Blanket of Sorrow' 'When ‘Airy Met Fairy’ are a band we’ve not covered too
Andy Wors

So it's our official 5th birthday today, and it's therefore pretty appropriate that we start with one of our favourite bands, a huge welcome back to the amazing 'CeaseTone', a project we first wrote back in our first few months of existence when we came across some 2014 experimentation by the bands founder Hafsteinn Þráinsson. Since then the band has received widespread praise for the exceptional 'Two Strangers' album, still an absolute favourite of ours, had nice words writ 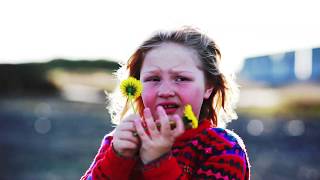 A couple of weeks ago we featured the Icelandic artist 'rauður' and her album 'Semilunar', a clever and intricate electronic based album that really appealed to us. Quite possibly the highlight of the album was the wonderful conclusion, a song entitled 'We Will All Feel Better One Day And / Or Die’, and now she has released a video to accompany the song which seems to fit the song perfectly - sad, joyous and uplifting all at once. This is what 'raudur' says about the video: '
Andy Wors

So we start with a week with a lovely album for us all to get immersed into, and it's a release from none other than 'Between Mountains', whom we first featured way back in 2017, shortly after they won the prestigious 'Músíktilraunir' - Iceland's Battle of the Bands Competition. At the time the duo from the Westfjords (Katla and Ásrós) were both under 16 years old, and it's still pretty extraordinary that they've managed to get an album fully written and recorded when they're
Andy Wors

We have a couple of long outstanding album reviews to bring you this week (apologies again to 'The Sideways'), but we wanted to write briefly about the debut album from Icelandic 'rauður', because this whilst we do love our 'Indie Pop' comfort food, her new album 'Semilunar' takes us into a different dimension completely, and the reality if that it'll probably take months to dissect and comprehend completely. So behind 'rauður' is the musician and producer Auður Viðarsdóttir,
Andy Wors

We've covered a lot of ground today, but we'll finish off with a rare and privileged treat - an almost exclusive first play of a new track by one of our favourite artists, Svavar Knútur. Hopefully you'll all remember Svavar from our previous features, but he's an Icelandic songwriter who's released streams of lovely material, including his 2015 album 'Brot' and the more recent 'Ahoy! Side A' . He's also just started an epic European tour, which is mostly in Germany (and sadly
Andy Wors

Sometimes it takes a little longer to develop an emotional connection to an album, but that's not necessarily a bad thing, because whilst albums like 'Beezewax' are an obviously attractive Indie Pop album full of melodies, maybe it lacks the real depth and substance to make it an album I'll keep going back to week on week. But thankfully there are other albums that grow beautifully on me over time, and the new(ish) album from 'Náttfari' does exactly that - 36 minutes of atmos
Andy Wors

I'm not entirely sure that a dark David Lynch inspired video somewhere from the depths of the underground music scene is quite the way to start a beautiful Summers day, but we'll go straight in there, because it's actually a pretty fantastic release. 'Twin Dive' are from Denmark, and they're a trio we've missed out on so far, but their unique brand of alternative grunge / punk has made quite an impression this year, particularly with their appearance at SPOT festival. Their n
Andy Wors

So what else have we missed? Well we've featured 'Baula' a couple of times, firstly in May 2016 when they released a delicious single entitled 'Don't Bother', and then a follow up song called 'Nova' which we really liked too. Anyway the good news is that there is now an entire EP of releases from the Swedish / Icelandic duo consisting of Ísak Ásgeirsson and Karolina Thunberg. It's entitled 'Drought', and its a great mix of indie rock and subtle electronica, with 'Thunberg'
Andy Wors

We were going to publish a short write up of Icelandic singer-songwriter 'Elvar's new single on Wednesday, this week but I so enjoyed listened to the whole album that I thought we should expand our feature slightly. His new(ish) release 'Daydreaming' is a warm, interesting and well written album which takes folk, pop and rock influences from across the last few decades, and whilst I doubt anyone would claim that he's forged groundbreaking musical genres in the process, I real
Andy Wors

I do sometimes regret the restrictions of a 'Nordic' music site, because I want us to write about singer songwriters from Chile, and post rock bands from China, there really shouldn't be any boundaries to whom we feature, but the music world is so vast it would be unmanageable, and thankfully Nordic artists often collaborate with musicians from outside the region to make these pages less confined. 'Pale Moon' are an Icelandic / Russian duo that feature musician Árni Guðjónsso
Andy Wors

We've covered the extraordinary M Rexen album this week, but our Album of the Week is far less 'weighty', and far more palatable on the ear. We've written about 'Ari' (Ari (Guðmundsson) previously when he released his 'Fræ'' album back in 2017 and the multi-instrumentalist is back with his second album, entitled 'Radikoj', and it's 10 nicely written songs, far more acoustic based than his last album, and the type of album that you should like on first listen - it certainly ap
Andy Wors

Album of the Week: 'dj. flugvél og geimskip' - 'Our Atlantis'

We want to keep up the momentum on Album Reviews (we did slightly less last week), even if it means keeping them short, and if truth be told 'dj. flugvél og geimskip' is the type of artist that is so difficult to define and write about, it's probably all best if you just go and take a listen for yourself anyway. But we will try to explain some background. So 'dj. flugvél og geimskip' can only be described as an 'experimental electronic' musician, she's from Iceland but has g
Andy Wors

I'm not going to write too much about the new Júníus Meyvant album, because I do think that it will get covered in a fair few other places, and I'd like to write about a few diverse Independent acts that probably won't get the same attention. But, as expected, it is such a beautifully written and performed soul folk album - slick, sophisticated and backed up with the most lovely instrumental arrangements. Hopefully everyone is pretty familiar with the Icelandic singer songw
Andy Wors

There's still a steady stream of good Nordic gigs in the UK if you look hard enough, and one band that we're particularly excited to see over in the UK are the phenomenal Icelandic band Árstíðir, who we've covered a few times, and who followed up their stunning 2015 album 'Hvel' with a new release in 2018 entitled 'Nivalis'. They have 5 UK dates and they're pretty much following the road we took with the Nordic Music Review promoted 'Major Parkinson' gigs, but with a detour t
Andy Wors

Similarly to Sara Forslund, we last wrote about Svavar Knútur a few years back - in 2015 when he released his album ‘Brot (The Breaking)'. The Icelandic singer songwriter from the Westernfjords has such a good reputation in his homeland, sadly (to our knowledge) he's yet to venture to the UK but we'll keep writing about him until some kindly UK festival promoter reads our ramblings and gives him a gig. Anyway his latest release is entitled 'Ahoy! Side A' and it contains 5 br
Andy Wors

It might have been well over 3 years since we wrote about our last featured artist 'Mani Orrason', but under a year since we write about fellow Icelandic songwriter 'Arni Ehmann', when he released his debut tracks 'Staring at the Moon' and 'Small Talk'. Anyway the good news is that he's back with his 3rd single from his forthcoming debt album and it's entitiled 'Night Caller'. The Reykjavik based singer songwriter made a pretty good impression with those debut songs, and I th
Andy Wors

It's been way too long since we last wrote about Máni Orrason, the young Icelandic songwriter who's made such an impression ever since he released his debut single way back in October 2014, despite being unfortunate enough to be featured in a brand new music blog called Nordic Music Review not long after. How we have survived the intervening 4 years is somewhat of a mystery, but Máni Orrason is just blessed with the most natural of music writing talents (ok I'm sure he works
Andy Wors